We know that money doesn't grow on trees, and with the majority of the wealth  concentrated in the hands of a few, the old "trickle down" theories have proven false.  As  resources and opportunities are often kept from those who need it most..."pulling yourself  up by your bootstraps" has become a slap in the face for millions of already hard-working Americans and their families.  Income inequality has never been more severe.  In communities of color, these inequalities  have exponentially negative effects on our human family, locally and globally. 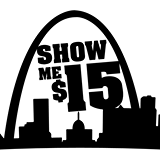 IPJ stands with Show Me 15, the Saint Louis branch of nationwide organizing low-wage workers seeking better pay and Union protection. If wages had kept up with inflation since the 60's, our standard minimum wage would be between $16 and $22 per hour.
Honest economists estimate that anything below $15 is considered below the poverty level (NOT a living wage). Many companies and CEO's are making record profits and still spend millions to lobby our leaders to keep pay low. These same companies often vote to subsidize themselves while cutting social programs that their own employees qualify for...due to this historic economic imbalance.
There is a reason why millions of Americans live in poverty, have outstanding credit card debt, can't afford healthcare, can't afford education, work 2 jobs with little to no time for family, and sometimes even gravitate towards illegal means of survival.
There is a reason why entire communities can't maintain a stable tax base that keeps their schools open, their infrastructure from crumbling, and even their water drinkable. This kind of greed and excess is so counter-productive...not only by crippling lives and the American dream of upward mobility but also even the present and future spending power of consumers that most companies rely on for their own survival.

IPJ is collaborating with different groups doing social services and advocacy work, to not only provide assistance but give homeless people them a voice as well.